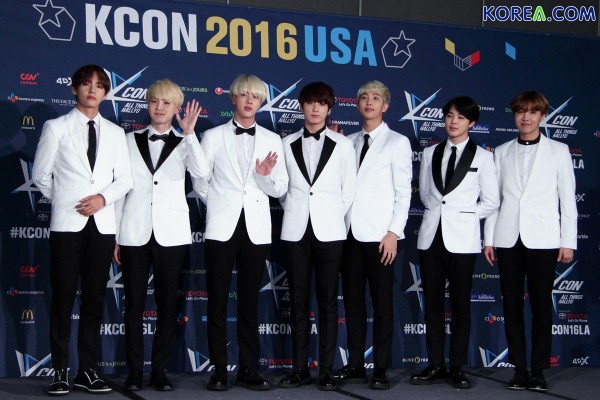 Similar to Day 1 at ​KCON 2016 LA Presented by Toyota​, Day 2 proved to be just as fun and spectacular as 7 different KPOP acts rocked out at Staples Center to hordes of screaming fans, ranging from all different age groups. It was a sight to behold to just see how much enthusiasm the fans brought for these artists who traveled far and still killed the night.

​Monsta X hypes up the crowd with sizzling performances​ 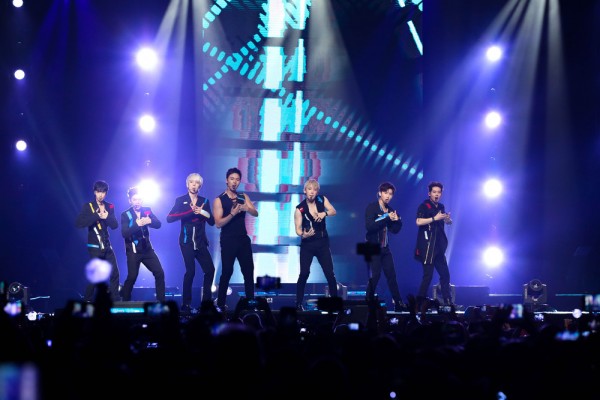 Having debuted just last year, ​Monsta X ​was once again invited to KCON this year and boy, the number of their fans increased tremendously in ​just one year​. Despite having flown in and arrived on the same day of the concert, the 7-member team showed no signs of weariness as they opened the concert up and showcased powerful dance moves in a special intro before they dived into their hit songs ​'​All In​', '​Hero​', and '​Trespass​'. In addition, the members' dance prowess was highlighted as they danced to '​Moves Like Jagger​'. Expect more from this dance/hip-hop team in the future!
​TWICE​ ​'Cheers Up' the crowd with their peppiness

Girl group ​TWICE​ has been making waves in the KPOP industry as the 9-member girl group, not even a year since its debut, has been quite popular with debut song ​'​Like OOH-AHH​' and the viral ​'​Sha Sha Sha​' from hit song '​Cheer Up​'. The girls made their first trip to the United States where they were showered with love from adoring fans. Their stage overflowing with cheerfulness and aegyo, the members matched the energy of the crowd with fantastic performances of 'Like OOH-AHH', 'Cheer Up', and funky song ​'​I'm Gonna Be a Star​'. As to commemorate their time in the States, the group rocked out to '​Uptown Funk​', much to the delight of the audience. With this much love from fans, it's safe to say that U.S. fans haven't seen the last of TWICE.
​Astro will leave you 'Breathless' with their cute, happy performances​

Thought all boy group performances were filled with dark, sexy performances? Think again! 6-member boy group ​Astro​ delighted fans with their bright and infectious smiles and personalities. They made a surprise appearance at the previous night's concert when they showed up to perform ​Turbo​'s ​'​Goodbye Yesterday​'. The 6 members showed few signs of nervousness even though this was the first time they had performed anywhere overseas. Needless to say, the members were quite thankful for this opportunity to perform in such a large stage such as the Staples Center. They brought their happy and cute personalities for '​Breathless​', ​'​Cat's Eye​', and ​'Hide & Seek​', leaving the arena filled with warm fuzzies.
​Sweetheart like none other, Eric Nam melts hearts of females in attendance​ 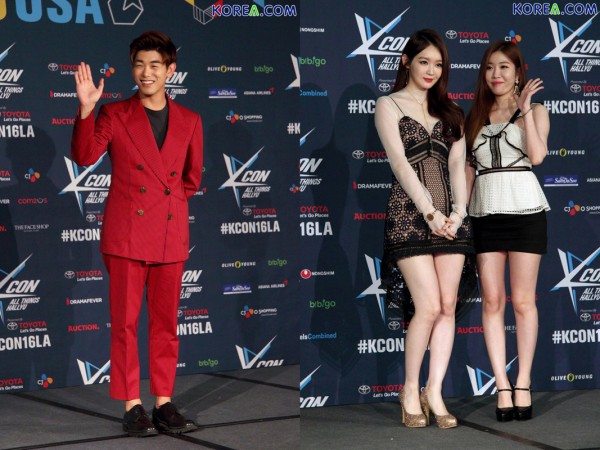 Does it come as a surprise that ​Eric Nam​ is just as sweet and good-natured in real life as he is on TV? The easygoing U.S. native from Atlanta, Georgia made even more fans as he performed for the first time at KCON LA, having been an MC for the past few years. Fans alleviated his fears of not showing off dance moves to his performances (as he has none) by singing along with the 27-year old singer as he sang '​Can't Help Myself​', '​Good 4 U​' ft ​KOLAJ​, and ​'​Into You​', hitting those high notes just oh so beautifully and clearly. He then turned in a special performance of ​'​I Just Wanna​' with another crowd favorite and hometown girl, ​f(x)​'s ​Amber​. The two showed off their eclectic skills and even MC'ed a portion of the show together, easily sending the crowd into hysterics with their rapport. Come back next year, Eric!
"Give me a call": Davichi blows away the audience with their vocals​ 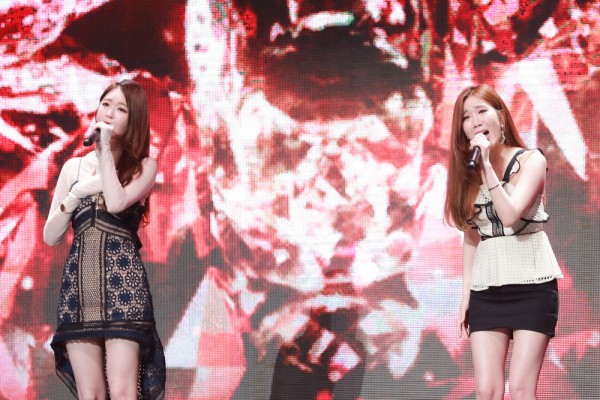 ​Photo courtesy of CJ E&M​
It's not easy being a duo and a ballad singer at the same time, but ​Davichi​, veterans of the KPOP industry, didn't let that stop them. In fact, during the red carpet, the ladies revealed that they would be performing upbeat songs at the concert to match the energy and tempo that would be set by the other artists. After all, this is LA and they thought it would be fitting. Their amazing vocal talent was highlighted as they sang their hit OST song '​This Love​', of ​'​Descendants of the Sun​' fame from earlier this year. Up next was a blast of the past as they got the audience to partake in the chorus line '​Give me a call, baby baby​' for ​'8282​', and wrapped up with a powerful rendition of ​'​Turtle​'. Hopefully they will be able to make another return to the Los Angeles area in a year and not have to wait 9 years for their next visit.
​It's Party Time with Girls' Generation - TTS! 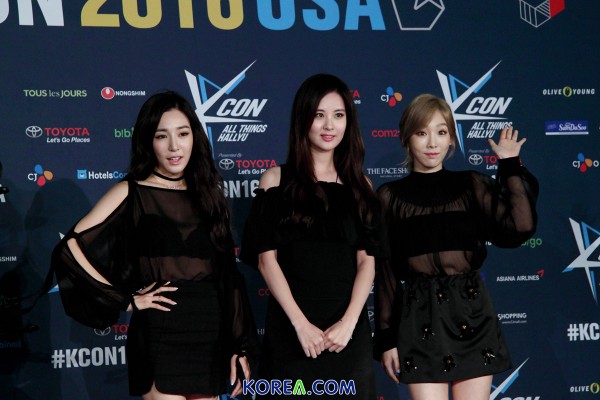 "What time is it? I can't hear you, LA!" That was ​Girls' Generation - TTS​'s ​Tiffany​ teasing the crowd before the trio sub-unit sang ​'​Party​', originally sung by the whole group ​Girls' Generation​. The three were excited to be performing for the third time under the Girls' Generation name, particularly Tiffany, who grew up in Los Angeles and was also celebrating her birthday (August 1st, which it was in Korea). Although it was only the three of them up on stage, the members felt the love and cheers that resonated throughout. The audience enthusiastically waved lightsticks as '​Twinkle​', '​Only U​', and '​Holler​', and died when member ​Seohyun​ said that LA was lit. ​Taeyeon​ refused cutely to speak in English, even as Tiffany was trying to get her to speak in English. Another group that should come back and perhaps as a whole and a solo concert too.
​BTS are on 'Fire' and make fans scream themselves hoarse 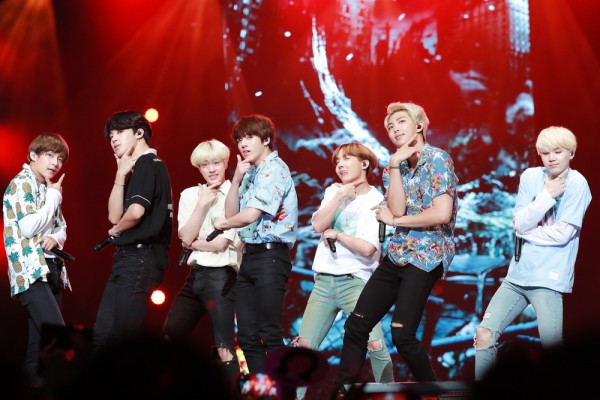 ​The loudest cheers of the night were reserved for one of the hottest groups in town, ​BTS​. The headlining group had actually come from a concert in Manila just the night before (imagine preparing for that, then flying to LA with jetlag), yet showed no signs of the wear and tear and hecticness as they delivered strong performances. Fans were besides themselves, screaming themselves hoarse. The screams were so deafening that MCs Eric and Amber could hardly hear themselves or even finish what they were saying. The whole Staples Center audience in attendance chanted the lyrics to '​Young Forever​', '​Fire​', '​Save Me', '​Cypher Pt. 3​', and '​Dope​'. Indeed the performances were all dope and BTS knows how to work the crowd.
All in all, these performances proved to be electric and amazing and those in attendance can agree that these performers know how to work the crowd!
​Korea.com would like to thank The Lippin Group​ for extending a media invitation to KCON 2016 LA Presented by Toyota, and CJ E&M, ​Mnet America​, ​Toyota​, ​KCON USA​, and ​Staples Center/LA Convention Center​ for hosting and working hard to make this 3-day event a success.